Narrow Construction of Disability in Media 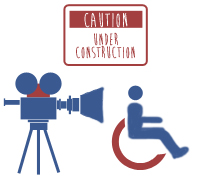 Much like other underserved and often underrepresented populations, all forms of media continue to narrowly construct people with disabilities. Whether referring to news media, or characters in movies, on Broadway, or primetime television, each provides the general population a limited glimpse into the lives of people with disabilities. On the small screen, GLAAD’s Where Are We on TV Report 2014 indicates only 1.4% of regular, primetime character in scripted series on broadcast networks will be depicted as people with disabilities despite the fact that nearly 20% of Americans have a disability. Unfortunately, even those few characters generally fall into one of a limited number of categories of disability typically including characters with Down Syndrome, hearing impairment, people using wheelchairs, or those with Autism Spectrum Disorders. In advertising, the new trend is featuring models with disabilities. Unfortunately, like network television, the few models currently being featured are people with Down Syndrome, or those with prosthetic limbs, and who are rarely signed to major modeling agencies, but instead smaller agencies who specialize in representing people with disabilities and modeling contracts for lesser-known brands.

Even when people with disabilities receive the opportunity to be represented in various scripted media, media creators are making decisions to cast actors and actresses who are not actually disabled. Take for example the recent backlash on Broadway when a non-autistic actor was chosen to play the lead in the play The Curious Incident of the Dog in the Night-Time. Similar situations have been seen in the movies and on television. Arty Abrams, the character who uses a wheelchair on Fox’s Glee, is played by the non-disabled actor Kevin McHale. Non-disabled actor Eddie Redmayne was selected to portray Stephen Hawking in Theory of Everything. Max Braverman, a teen with Aspergers Syndrome on Parenthood, was played by neutrotypical actor Max Burkholder. While it is unfortunate that actors and actresses with disabilities are missing vital opportunities for employment, also discouraging is the often misinterpreted representation of various aspects of disability which occur when characters are not disabled. Whether it is the media created fallacy that all autistic people are monotone and possess little in the way of personality, or that blind people touch the face of others to identify another person, these misconceptions perpetrated by narrow constructions in media affect the way the general public receives, interacts with, and includes people with disabilities. It is necessary to diversity not only the type of characters portrayed in various scripted media, but the types of actors playing these roles to ensure that people with disabilities are represented accurately and widely across all media.